Are you looking for the best drone under $1000? Do you need help in finding the best quadcopter at this price point?

Many thought that quadcopters are expensive, but that is just a misconception. More and more find drones interesting. In the past years, the demand for UAVs (unmanned aerial vehicles) rises, so are the supplies. The competition in the market helps consumers enjoy drones at a competitive price.

If your budget for a drone is $1,000, I’m pleased to tell you that you can find a lot of advanced drones with powerful features in the market given that budget. Most drones worth $1,000 have great cameras and come with intelligent flight modes.

I understand that you are already very excited to see your options, so let’s get started! 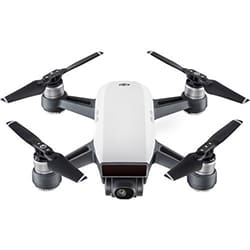 Spark is a mini drone that features all the signature technologies from DJI. It is small, but it comes with big and powerful features that make this quadcopter as amazing as the more advanced quads from the company.

One of the best things about Spark is its high-performance camera. This quad can deliver amazing images and stabilized videos that you will surely love thanks to its mechanical gimbal and powerful lens.

This camera drone is versatile when it comes to photography. It delivers consistently sharp and vivid photos with very little color aberration and distortion. This is sensitive to light and records colors precisely.

Aside from its awesome potential, this offers you immersive user experience. It has an aerodynamic, lightweight and slick design. It soars through the air with minimal wind resistance.

This comes with innovative HD Wi-Fi technology that allows for real-time video transmission up to 1.2mi. This also comes with intelligent features without compromising the flight time. It can fly up to 16 minutes with a fully-charged battery.

Another thing that I love about this quad so much is its intelligent flight modes. Spark lets you take professional shots even if you are not a pro. QuickShots, in particular, enables you to shoot amazing footage with cinematic composition.

Also, I love its gesture recognition that allows you to take selfies with simple hand motions. With Palm Control mode, you can command the drone to launch, follow you, take a selfie or record a video.

If you want to enjoy Spark’s speed potential, switch to Sport Mode. This will automatically set the gimbal mode to FPV. You can pick up a pair of DJI Goggles for to maximize the fascinating flying experience.

Spark comes with an advanced flight control system that makes flying this drone fun and intuitive. With this, you can fly farther and see more of the world from a different perspective.

If you want to experience all of these things, I recommend Spark! 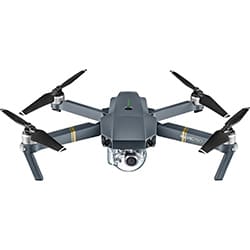 Mavic Pro is another compact and foldable drone from DJI. It has a stabilized camera with 3-axis gimbal system which makes it a great camera drone if you are always on the go.

The first thing I love about this drone is its design because it is ultraportable. Second, I’m impressed with its camera. This quad can record videos at 4K/30fps and shot 12mp still photos. This also supports Adobe DNG RAW photos.

Mavic Pro is small but powerful. Do not judge it based on its size because behind it is a high degree of complexity that makes it the brand’s most sophisticated flying camera.

It uses FlightAutonomy technology to sense obstacles up to 15m away. This technology also allows Mavic Pro to bypass them or brake reducing the instances of accidents and crashes. Aside from GPS, this drone comes with forward and downward vision sensors to enable it to hover precisely indoors or in places without GPS signal.

Also, DJI designed Mavic Pro without sacrificing the most important factors in a drone like flight time. This aircraft includes Full High Definition (FHD) video transmission system and the company knows that the users would want to increase the flight time and speed. So, they designed this to fly up to 27 minutes and reach speeds up to 40mph.

Mavic Pro has a very efficient propulsion system that allows it to fly more than twice the 10 minutes flight time that most foldable drones or pocket-sized drones on the market offer. Also, even if this is small, you should not worry about its stability when flying against the wind because its airframe and propulsion system have been optimized to maintain stability.

Mavic Pro is also smart enough to keep the same level height above the ground automatically. Sometimes, you’re unaware that you’re already flying too low, with this drone, you don’t have to worry about that because this will hover at the right height over uneven terrain.

Beginners will love this drone because it is very easy to fly. It has excellent technology and intelligent batteries that help you monitor your flight. It calculates the remaining flight time which helps you fly more safely.

That’s not all; DJI addresses the common issue among drones – defective sensor. They equip the drone with two sets of sensors, so if one goes wrong the other kicks in to take its place for a more reliable and secure flight.

If you hate the noise drones make, Mavic Pro Platinum is designed for a quieter flight. The aircraft comes with the new FOC sinusoidal driver ESCs and 8331 propellers reduce noise by up to 4dB or 60{ea2cf71a94ac0ec497812eb0b7c2bc33f9b74ebf28048bb730380b7f1d9c4acc} for more enjoyable flight experience. Mavic Pro Platinum is one of the best silent drones in the market.

Mavic Pro is a small but very powerful drone which makes it even more impressive. So, I highly recommend this. 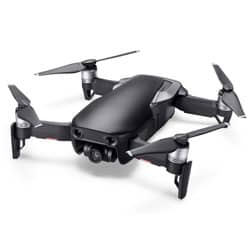 Mavic Air is another foldable drone from DJI that fits your budget. This quad is designed to go wherever your adventure takes you. Just like Mavic Pro this inherits the best thing there is in the Mavic series for high-end flight performance and functionality.

Air has a 3-axis gimbal system and 4K camera. Its angular vibration range is reduced to 0.005-degree with gimbal dampeners for steadier shots.

In addition to the horizontal, vertical and 180-degree panoramas, Mavic Air stitches 25 photos together in just eight seconds to create a crystal-clear 32mp sphere panoramas. If you are into epic high-speed adventures, good news, this drone can record 1080p at 120fps slow-motion videos!

It also uses a new HDR algorithm that automatically processes your photos to obtain the right exposure setting no matter what the lighting condition is. The overexposed and dark areas are processed for more natural transitions between highlights and shadows while its DSP acceleration allows for more efficient shooting.

Mavic Air delivers amazing photos and breathtaking footage that will surely impress you because as I said, this is built for every adventure. If you frequently travel, you will appreciate its design because it has geometric precision.

When folding this drone, just fold flush the arms against its aerodynamic chassis. Its magnesium alloy brackets reinforce the seven onboard cameras, rear vents dissipate heat efficiently and the primary gimbal camera is recessed for better protection. So, you don’t have to worry every time you fold this because you won’t break it.

Most beginners end up confused about what to pick between Mavic Air and Mavic Pro. These two drones have a lot of similar features but differ in some areas.

Mavic Air is better than Mavic Pro in terms of sensors. Air comes with improved sensors that help you fly the drone smarter while keeping it safe by avoiding obstacles. However, Mavic Pro edges the Air when it comes to operational distance because it can communicate with the controller up to 4.3mi away while Air only has a 2.5mi functional range.

Both have a 12mp camera sensor but Mavic Pro can shoot in cinematic 4K with a higher resolution version at the industry-standard 24fps. The photos captured by Mavic Pro are sharper, have more details and have a better fisheye effect because its camera has close to zero image distortion. But Air offers more storage because it can support a 128GP microSD with an internal storage of 8GB. On the other hand, Mavic Pro only supports 64GB. 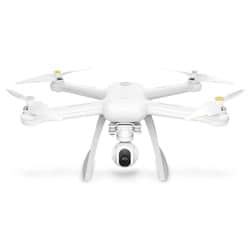 Xiaomi Mi Drone is another option for those looking for drones under $1000. I know that this is not as popular as DJI’s Mavic series, but it is very promising. It has long battery life and captures amazing shots.

This quad comes with 5100mAH high energy density LG/Grepow batteries, so it can fly up to 27 minutes. Replacing batteries is easy and simple. This also comes with intelligent protection technology that makes batteries safe and long-lasting.

Xiaomi Mi is agile so it is very smooth and easy to control. It is very responsive, so you can expect smoother and more precise movements.

This also comes with GPS and GLONASS positioning that sets pinned location faster and more accurately. It also comes with the CORTEXT-A7 quadcore processor with advanced optical flow and night vision algorithms that makes it highly sensitive to detect surfaces even indoors with minimal GPS for safer flights.

Mi Drone is also very smart because it automatically stops, hovers and sends out an alert when it approaches a no-fly zone. Also, when it senses that the battery is getting low, it calculates the power required to return home and automatically returns. It also returns home when the remote disconnects, so this is very safe to fly.

Although Mi Drone is not very popular, it is very competitive and easy to fly. I love its security features, especially how it secures the drone by automatically enabling it to return to you when the battery is low or when the control is disconnected because, with this feature, you’ll surely not lose your drone that easily.

Overall, I’m impressed with Mi Drone. I suggest that you give this drone a try and see if it lives up to your expectations. As for me, I’m very satisfied. 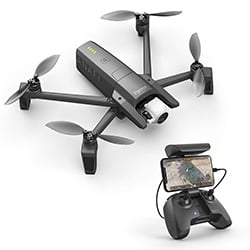 Parrot Anafi is another ideal go-to solution for those who want to film stunning high-quality videos and take amazing photos on their adventures. Just like DJI’s Mavic series, this drone is foldable and has a powerful camera.

Anafi comes with 4K HDR camera that boasts of its exclusive video and photo shooting capabilities thanks to its 180-degree tilt gimbal and up to 2.8x lossless zoom to visualize details clearly. Lossless zoom allows you to get a closer look at your subject without any resolution loss, which is a great advantage for Anafi as not all camera drones offer this.

It also comes with a wide-angle aspherical lens with optics engineered to reduce lens flare and chromatic aberrations no matter what the situation is for sublime images.

Anafi lets you shoot every moment in high-quality whether you are having a walk in the park or out enjoying your favorite activity. With this camera drone, you’ll be able to capture breathtaking videos and photos that you will surely love.

I’m very happy with Parrot Anafi’s camera. I also love its light and robust design and structure. This collapsible drone fits in most bags and pockets and unfolds in less than 3 seconds. It comes with equally tiny and foldable Parrot Skycontroller 3 for easy transport.

Yes, this drone is ultraportable with an amazing camera which is very impressive! If you want a camera drone to vlog your trips and adventures or to document something this can get the job done without giving you a hard time in transporting it because you can conveniently fit this in your pocket or bag.

There are many drones under $1000 and the quads I listed above stand out from the rest. All of them are easy to fly, convenient to transport and have amazing cameras. They also offer powerful features that offer fun and safe flying experience!

What’s the best drone under $1000 for you? Do you have other recommendations? Please feel free to share your ideas with us to give other readers more options in choosing the best quad for them at this price range.