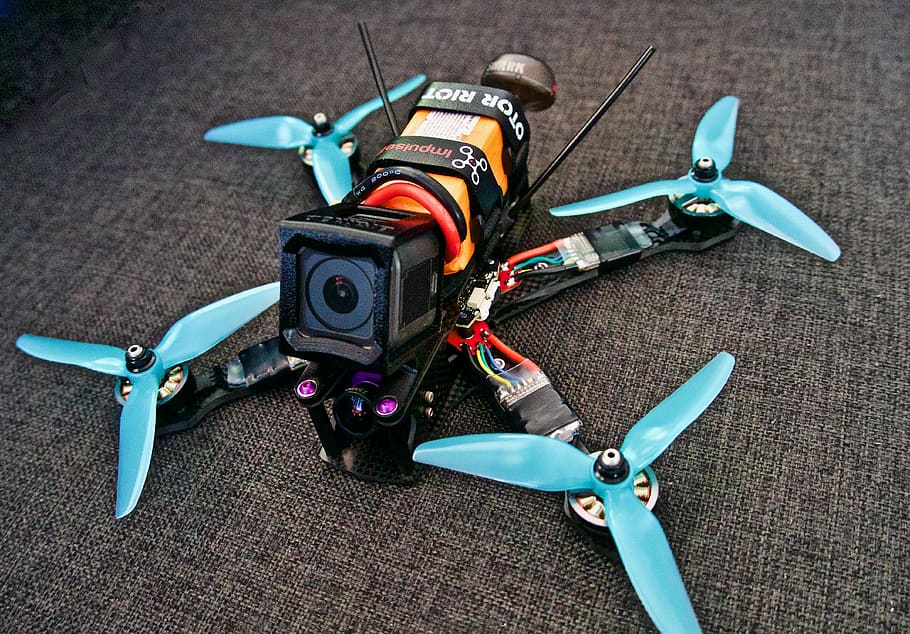 Did you know that the “number of small hobbyist drones registered in the United States totaled 1.1 million units in 2019.” This stat was published by the Federal Aviation Administration (FAA) on March 10, 2020. Gone are the days when drones were restricted to science experiments and secret military operations. In 2020, even a kid can build his/her drone and fly without needing a license.

The FAA lets you fly the drone without a remote pilot’s license as long you do it for recreational purposes. Not only that, but you also have to follow the guidelines set by the local authorities (and the FAA). Since you have decided to build your own drone, I am assuming you already have decent experience flying an unmanned aerial vehicle (UAV).

Usually, newbie drone pilots prefer to buy a starter drone. Learning to fly can take a while, and accidents such as crash or rough landings are quite prevalent. You don’t want to risk damaging an expensive drone. I also want to make it clear that anyone — irrespective of their educational qualifications— can learn how to build a drone. The ready-to-assemble components/parts are available in the market.

Can You Build Your Own Drone?

I understand why so many people wonder if it is really possible to build a drone— all by yourself— at home. A drone may appear like a complex, intricate, and highly technical machinery, but when you have the right tools at your disposal, assembling it is easy as pie. Like any other ready-to-assemble electronics project, constructing a drone is easy and requires minimal effort.

Is it Cheaper to Build or Buy a Drone?

It is always cheaper to buy a ready-to-fly drone than to build one. That being said, you should build a drone only if you wish to learn to fly it. Drone piloting is not a natural skill. Crashing or losing a DIY drone will result in a considerable loss. Trainer drones are available under $100. You can learn without putting too much at risk. To conclude, trainer drones are cheaper than building one with similar features.

What are the Types of Drone I Can Build on My Own?

A quadcopter is the most popular type of drone among drone hobbyists. When building with the right components, it can be powerful and effective enough for both personal and professional use. In this section, I have shared the different types of drones you can make at home. You must pick the components/parts depending on the type you choose.

As I already stated, a quadcopter is one of the most sought-after consumer unmanned aircraft. It is also popularly known as a quad or a quadcopter helicopter. It is lifted and propelled by four rotors.

Two rotors or propeller blades rotate clockwise, and the other two rotate anti-clockwise. The speed of each rotor can be controlled via remote control. The lifting force (known as thrust) and turning force (known as torque) can be varied depending on the requirement.

A hexacopter is a multirotor with six rotor arms. Unlike a quadcopter, a hexacopter can lift heavier payloads. Also, the addition of two rotor blades makes this type of drone more stable and reliable.

A likelihood of a drone crash goes up in regions with trees, electric wires, or houses. In such an unfortunate event, you don’t want to lose the entire drone— a hexacopter is perfectly capable of flying even with a damaged rotor.

The octocopter is an unmanned aerial vehicle with a total of eight rotors. These drones are used in applications requiring lifting of heavy recording equipment. Octocopters have eight propeller blades and, as a result, are more stable than quadcopters and hexacopters— particularly when flying at a high altitude.

The presence of eight propellor blades also gives octocopters greater thrust, more maneuverability in mid-air, and a lightning flying speed. Also, the acceleration and deceleration capabilities of an octocopter are unmatchable. Needless to say, building an octocopter at home will need more time, effort, and resources.

How Much Does it Cost to Build a Drone?

Generally speaking, building your own drone at home won’t cost you more than $250. You can also lower the investment to $200 if you are willing to hunt for the budget-priced components (sometime you might have to wait for the discount season).

In the next section, I have listed the components/parts required to build your own drone. I have also included the approximate cost of each component/part.

What Do I Need to Build a Drone?

To build your own drone you will need to purchase the following components/parts:

As you already must know, a drone is controlled by a remote controller handled by the pilot. The pilot can control the RPM of each rotor with a click of a button. The propellers do not receive the signals directly from the remote controller.

Fortunately, if you are planning to build your own drone, you don’t have to worry about creating every little part from scratch. A drone frame is a structure on which the entire drone components/parts rest. These frames are readily available in the market.

Do not mistake a drone frame for a drone kit. Drone kits come with all components/parts/accessories required to build a drone in one convenient package. However, they are a bit expensive. Hence I haven’t considered them as the first choice.

What kind of a drone frame should one pick? You will notice that drone frames available in the market are made with a variety of materials. If you are building a drone for video recording or racing purposes, always buy a drone frame made with carbon fiber material.

Rest, the weight should not exceed more than 150 grams (to be specific, it depends on the application).

The blades of the brushless motor in an FPV drone are pointed upwards. When they rotate, the structure is lifted due to the upward thrust generated. These motors are capable of generating a turning force known as torque.

Motors used in an FPV drone are lightweight and compact. They also have labels indicating the direction of rotation. The number of motors you should buy depends on the type of drone you wish to build.

In a brushed motor, the ESCs may or may not be needed. The speed of the blades can easily be controlled with the supplied voltage. Such is not the case with a brushless motor. The ESCs receive a signal from the remote controller (via flight controller), which changes the switching rate of a network of field-effect transistors (FETs).

The switching frequency of the FETs dictates the speed of the brushless motor. In case you didn’t know, the FETs have a high input impedance, and as a result, they protect the motors from getting damaged due to irregularities in the power supply. They also prevent overheating of the motors.

Propellers are the blades that rotate either clockwise or counterclockwise— depending on the type of the motor. The blades convert the rotational power of the motor onto an upwards thrust. Although propellers are also used in sea vessels, the direction of trust in a sea vessel is horizontal and not vertical.

Propeller blades used in consumer drones are made from a lightweight material called carbon fiber. They are durable enough to withstand crashes and rough landings. Also, they are one-size-fits-all.

To operate such a complex machine, you need an efficient system that can supply uninterrupted power without ever breaking down. When you fly a drone above 200 meters from the ground, you are risking the machine and the lives of people/animals beneath. A ten-pound drone— falling from the sky— can do a lot of damage to living beings and property.

Lithium ions batteries are considered to be the best for a consumer drone. They are not only reliable but also cost-effective— they are rechargeable. Moreover, these batteries are capable of operating in a wide range of temperatures. They have higher energy density and voltage capacity than any other type of cell. Lithium batteries are categorized (as 1S, 2S, 3S, etc.) based on its nominal voltage ratings.

Unless you are planning to build a small-range racing drone, installing the right type of an FPV camera is a must. The live footage that you receive from an FPV camera helps you navigate the device without having to keep track of the drone visually.

For professional purposes, you will need a drone with a flight range of more than 200 meters. Without the live video stream, it would be impossible to control the drone located beyond your eyesight.

Pick an HD FPV camera based on the picture quality you desire. You can easily find an affordable HD camera that offers decent 1080p picture quality. However, not all affordable FPV HD cameras are capable of capturing content in low light. I would recommend brands like GoPro and DJI.

A transmitter is nothing but the remote controller handled by the pilot. The transmitter is in constant communication with the receiver— which is connected to the flight controller. Under regulations set by the relevant authorities, a transmitter operated on a fixed frequency of 2.4GHz.

How to Build a Drone

In the following table, I have provided easy-to-follow instructions to help you build a DIY drone.

When learning how to build a drone, it is normal to doubt your ability to put together such a complex-looking device. I would like to tell you that assembling a drone does not require you to have a college degree in electronics, neither do you need to have passion or interest in this subject. Simply follow the steps given in this post, and you will have a fully-equipped drone ready for its first flight.