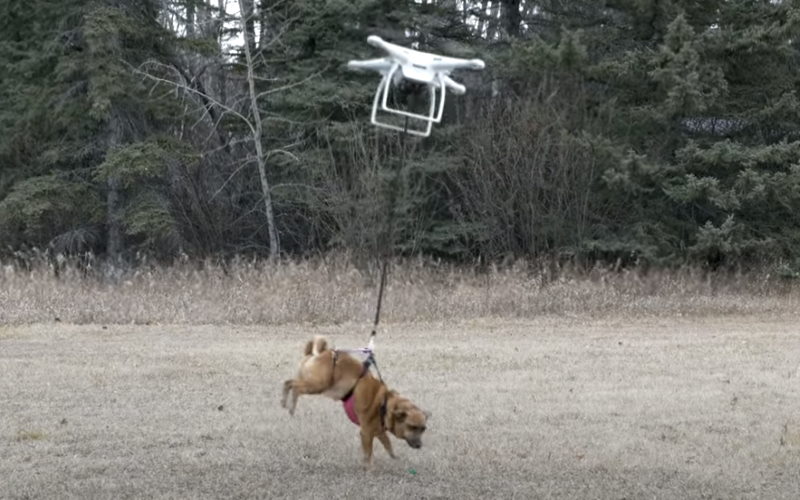 ‘Dog stolen by drone’ is quite the headline!

Everyone reading it presumably imagines a large drone buzzing across the gardens of suburbia….

It rotates, slowly, with evil intent.

It appears to have noticed something!

A cute, family-friendly dog is standing in the middle of a garden.

The drone swoops towards it, a huge mechanical claw attached to its underside. It grabs Bingo and hoists him away as he howls in terror.

The owners watch from the kitchen window, powerless and shocked.

Cruella will finally have a stole to match her coat.

But this has never happened, and it is highly unlikely this will ever happen.

The reason I’m confident it won’t happen is based on a few things:

Sure, there are drones available that have high enough payloads that they could carry a large dog, but they are crazy expensive and anyway, the payload isn’t the difficult bit, technologically speaking. The tricky bit would be finding a claw type device that would be both strong enough to firmly grip a struggling dog and gentle enough to not kill it.

I suppose it’s possible that this sort of thing might be manufactured in the future, perhaps for the purposes of legitimate rescues. But it’s not here at the moment. Back in 2021 there was a plan afoot to rescue some dogs trapped by a volcano in La Palma (Canary Islands) and the way they were planning on hoisting the dogs was via a large net. This would no doubt have taken multiple attempts and a lot of time, so not a good method of dog theft! Incidentally, if you’re interested in this story you can check it out here. The dogs ended up getting rescued by people on foot, who carried out the mission secretly, probably to avoid prosecution.

2. Dog behaviour combined with the difficulties of piloting a drone.

Just imagine how the average dog reacts to an approaching drone! They go batsh*t crazy!!

And it’s not like you can sneak up on them; even quiet drones are plenty loud enough for a dog to hear. Then you’ve got the piloting aspect to deal with. If you’re an experienced operator you can probably get a drone to do exactly what you want, when you’re just trying to take a photo of perhaps survey a roof. But floating around a couple of feet from the floor, rapidly darting about trying to keep up with a dog, whilst maintaining the alignment of a grabbing mechanism!? That would be a different story.

3. Third and final point; it wouldn’t be worth the money.

I guess we can agree that the reason we’re talking about this at all is because people have concerns about dogs being stolen by criminals hoping to sell them on or perhaps demand a ransom? If that’s the case, it feels like the amount of money that could be made here doesn’t really match up with the amount of time and effort that would have to be invested in making it happen.

It has to be acknowledged that the occasional high value reward could make dog theft pay. For example there was a recent story about Daniel Sturridge being forced to pay a $25,000 reward he offered for the return of his lost dog. But that sort of thing doesn’t happen often, and since it is illegal to offer rewards for the return of pets in most countries, it is not likely to become a frequent occurrence.

And the bad guys certainly aren’t about to start using $10k drones to steal the overweight Labrador you bought for $100. You can relax.

So why is this something I’ve bothered writing about, if it’s not a thing? Well, that’s because it is a thing as far as the internet is concerned! And that’s due to the following ⬇️

Back in mid-2016 a video was posted on YouTube, and later shared widely on Facebook. It showed a dog on a leash, being taken for a walk by a drone. The owner, who was shooting the video, sat in a chair nearby, controlling the drone.

It all goes well for a short while, until the owner apparently loses control of the drone which lifts the dog into the air and then flies away, over some trees and toward a mountain range.

And that’s why there are multiple articles and mentions across the ‘net of drones stealing dogs.

Which would be fine, if it weren’t for the fact that the video is obviously fake. Check it out….

Strangely, I find it difficult to point out specific reasons to believe the video is doctored, despite it being so clearly inaccurate. I’m sure an expert in image analysis would go to town on it.

I’ll offer up one weak point that’s apparent even to me, and that’s the leash. Around the 30-35 second mark it mostly just, disappears!

Dog rescued by drone (and sausage)

There’s recently been a story in the real news, which is tangentially related to the topic of drone-based dog theft, but it goes in a slightly nicer direction.

The dog had got itself stuck on some mudflats, and the tide was rapidly approaching.

With little time to spare, a local drone enthusiast tied a sausage to the bottom of a drone and flew it over the dog. Of course, even in the midst of a life-threatening situation the mutt couldn’t resist, so it followed the elusive sausage all the way to safety.

So, whilst it seems unlikely that we’ll be hearing about drones facilitating canine kidnaps anytime soon, we may well see more reports of them helping them, and us, out of sticky situations.