The DJI Mavic Mini remains one of the most popular drones in the ever-expanding DJI family. Regarded for its portability and ease of use, the Mavic Mini also has a low price that you don’t find in many DJI drones ($400 new). Accessorizing your Mavic Mini can make it even more fun, but which accessories should you choose?

Here are our top 6 DJI Mavic Mini accessories to take your drone further:

The accessories we’re going to discuss in this guide are all officially produced through DJI so you don’t have to worry about compatibility issues. If you own a Mavic Mini 2, some of these accessories are usable on that drone; if not, DJI makes updated accessories.

We’ve got lots of great information on these accessories ahead, so keep reading!

It’s one thing if you want to tuck a $100 drone in a drawer when you’re not using it, but yours is a DJI. It should go in a place of honor between flights, such as its own travel bag. A bag is also a must if you use your UAV for work, such as for real estate, wedding, or news photography and videography. 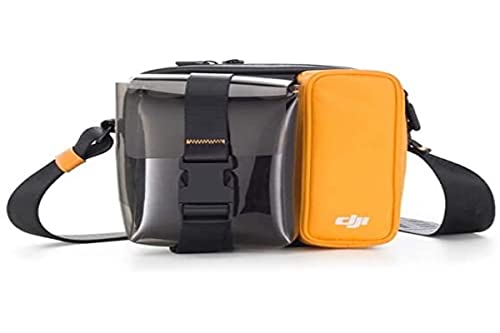 DJI’s Mini Bag is only $40, so it doesn’t break the bank in the least to protect your Mavic Mini. Not only is there room for your drone in this bag, but also space for a remote control, DJI’s Two-Way Charging Hub (more on this later), and even non-DJI products such as the Osmo Action or Osmo Pocket, both of which are cameras.

For the professional on the go, the Mini Bag is available in all black. You can also shop this bag in fun color schemes such as yellow and black or yellow and blue. Worn like a cross-body bag, this DJI bag is trendy enough that you’ll want to tote it around with you all the time, even if you’re not necessarily carrying your drone!

Here’s a video showing the bag being opened for the first time. As that video illustrates, the Mini Bag is plenty roomy. You could even use it for stashing your keys, your wallet, and other small valuables.

Do you hate the way that all drones look the same, even those from DJI? Then you have to check out the DIY Creative Kit, as it’s among the most fun accessories available for the DJI Mavic Mini. 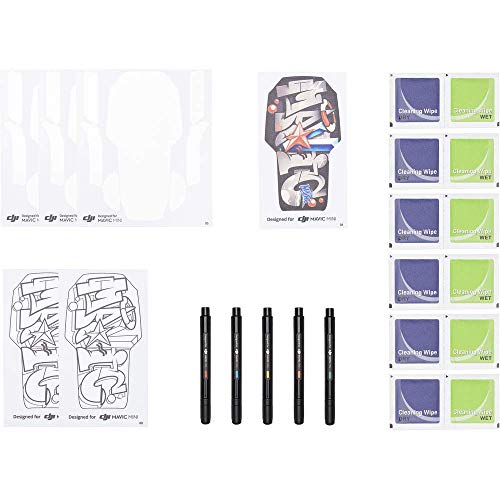 What is the Creative Kit, you ask? It’s your ticket to customizing your Mavic Mini however your heart desires. Included in the $15 kit are markers in plenty of fun colors and blank stickers that adhere to the shell of your drone. Some of the stickers are black and white so you can color them with the markers while others are pre-colored so you have to do less work.

DJI gives you five marker pens, six cleaning wipes, and six sticker skins per kit. You could always buy more markers and sticker skins at your favorite craft supply store if you feel like you don’t have enough. However, the stickers might not adhere as well as the DJI ones since those are designed for UAVs. After all, DJI uses 3M Scotchcal film for their stickers.

Nothing is stopping you from doubling up on Creative Kits, cutting pieces from the sticker skins, and truly making a custom cover for your Mavic Mini. Although the stickers and markers aren’t waterproof, neither is the Mavic Mini, so make sure you bring your drone back down to earth if the weather is turning bad.

The one caveat we have about the Creative Kit is that adding colorful stickers to your Mavic Mini will certainly impact its resale value. If you have no intention of selling your drone someday, then disregard this. However, for those who might want to use their drone for a year or two and then sell it, buyers would likely want a plain Mavic Mini (or any drone, really) compared to a souped-up stickered one.

Your Mavic Mini no doubt came with propellers when you bought it, but those won’t last forever. DJI themselves tell their users to change out their drone’s propellers on a three-month basis, per this forum discussion. 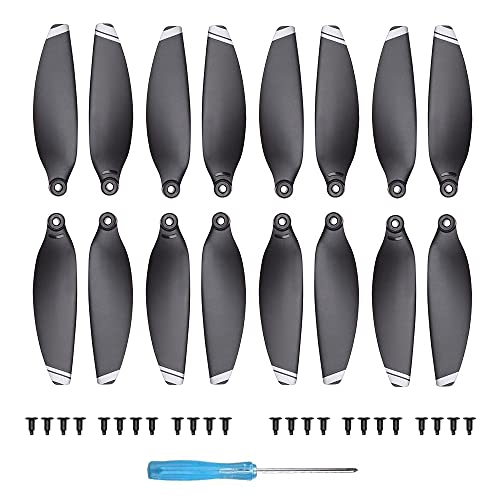 Therefore, you can never have too many spare props. Don’t bring down the sleek looks of your Mavic Mini by purchasing any old propeller set you can get your hands on. Instead, buy the most affordable Mavic Mini propellers available.

Weighing 0.5 grams, each prop measures 4.7 inches by 2.6 inches. Your package will arrive with two pairs of propellers and 12 screws for assembly. Yes, you will have to install each propeller yourself. Here’s a tutorial video from DJI that goes through the replacement process.

DJI promises better thrust and quieter operation of the Mavic Mini through these propellers. Compared to the original props included with your Mavic Mini, the replacement set is also smaller.

Are you new to flying drones and you decided to start with the Mavic Mini? You’ll want to seriously consider DJI’s 360-degree propeller guard. Each guard encompasses the entirety of your Mavic Mini’s propeller so the prop’s blades aren’t free to make contact with anything and everything. 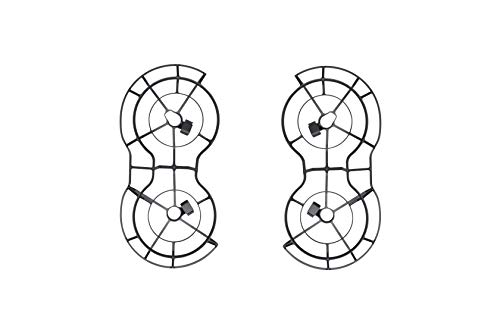 DJI recommends their propeller guards if you’re outdoors flying in a location where obstacles are prevalent. For instance, maybe you’re doing an environmental survey and you don’t want to disturb the wildlife. You could even be flying for personal enjoyment at a crowded park and you don’t wish to hit anyone with your drone.

Although we don’t really recommend indoor drone flying, DJI says that with their propeller guards, your Mavic Mini 2 is safe to fly inside, as it would be far less likely to damage your home or hurt people and pets.

There are some downsides to the propeller guards that we have to discuss. First, although we’ve been referring to them as plural throughout this section, you only get one prop guard in a set. So you might look at the price of the propeller guard on the DJI website, which is $19, and think that’s cheap, but remember, you have to double it.

Admittedly, $38 is not a lot to spend to protect your propellers. The guards might increase the longevity of your props so you don’t have to drop $13 every few months on a new set of propellers, which is a nice benefit.

However, for that added protection, you do lose flight time. The average flight time of the original Mavic Mini is 30 minutes. DJI says the flight time with the prop guards installed is 18 minutes. If you use your drone for professional purposes, then you might have to make the hard choice between protecting your Mavic Mini props or going without so your drone can fly longer.

When your drone’s flight time elapses, it’s time to bring ‘er on home before the battery depletes entirely. Then you need to plug in your Mavic Mini and let it charge. Yet what if you have more than one DJI drone and its battery happens to drain at the same time as your Mavic Mini? 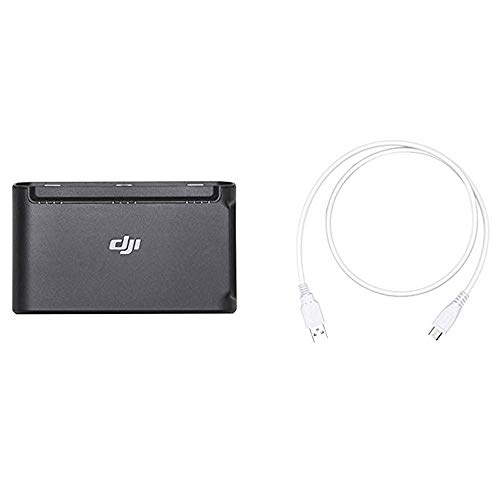 Normally, you’d have to prioritize which drone battery you charge, but not anymore. The DJI Two-Way Charging Hub can charge up to three batteries consecutively, including external devices outside of your Mavic Mini.

The cost of the Two-Way Charging Hub is very affordable. The Hub includes a micro-USB cable that you plug into your Mavic Mini or non-DJI accessories such as the Osmo Action or Osmo Pocket cameras, your tablet, and even your smartphone.

According to DJI, if you charge with their 18-watt USB Charger, then you can charge three drone batteries in 4.5 hours. This hub is smart, as it determines which of the three batteries needs a charge the most and begins with that one. You’ll know when your drone batteries are done charging when the LED light of the Two-Way Charging Hub turns on.

All this works assuming your Two-Way Charging Hub is kept in an operating temperature of 41 to 104 degrees Fahrenheit with an input of 5V/2A, 9V/2A, or 12V/2A and a USB port max output of 5V/2A. You must use an 18-watt DJI USB charger as well.

We do want to say that although the Two-Way Charging Hub can be a convenient tool for charging the batteries of your Mavic Mini, the charging time is still pretty slow. You can’t afford to wait around for four or five hours if you’re using your drone for work, so you might want to have some spare batteries handy that you can use while the first set charges.

That brings us to the last DJI Mavic Mini accessory on our list, the Intelligent Flight Battery. This is DJI’s premium drone battery that can increase your flight time to a max of 30 minutes (provided you’re not using their propeller guard, of course). 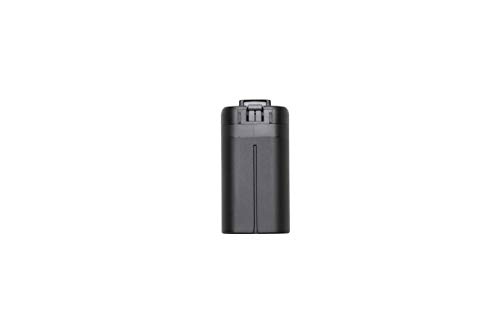 What’s nice about the Intelligent Flight Battery is that, like the Two-Way Charging Hub, it’s smart tech. The battery includes DJI’s Intelligent Battery Management System built-in so you can always track the status and health of your Mavic Mini batteries.

Each Li-ion 2S battery is $45. Stocking up on a few Intelligent Flight Batteries could get expensive, but if you use your drone for daily photography and videography, then you might not have a choice.

The battery can hold up to 2,400 milliamp hours or mAh of power at its rated capacity. Its limited charge voltage is 8.4 volts and the max charging power should be no more than 24 watts. Charge at a temperature range of 41 to 104 degrees to keep your Intelligent Flight Battery in flyable condition for a long time to come.

We must mention that overcharging the battery or storing it in conditions other than those recommended by DJI can degrade the life of the Intelligent Flight Battery battery just as would be the case for your smartphone or tablet. Don’t waste $45! Take good care of your drone battery.

The DJI Mavic Mini and its successor the Mavic Mini 2 are some of the smallest and most inexpensive drones in the DJI family. The Mavic Mini is compatible with lots of useful accessories that make using your drone safer, easier, and more enjoyable. We hope this article has helped you choose some great accessories for your Mavic Mini!