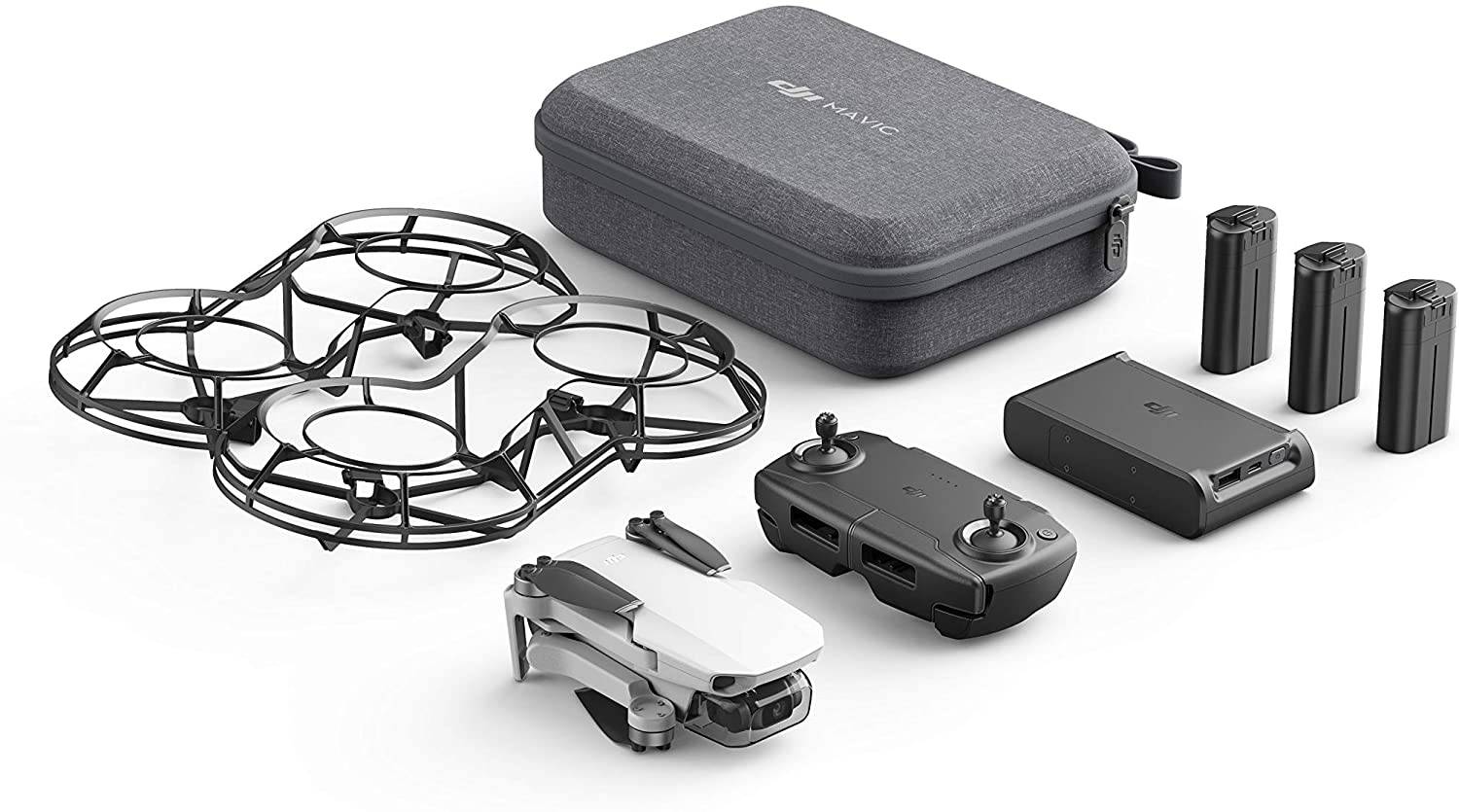 When discussing the DJI Mavic Mini drone, it’s pretty hard not to mention the Mini 2 in the same breath. (See, there we did it already.) That’s because these two quadcopters are close cousins. That said, we’ll leave the Mini 2 out of the discussion for the rest of this Mavic Mini review and concentrate on the one model only. (At least, we promise to try.)

The DJI Mavic Mini isn’t inexpensive, but it does cost less than that other drone we’re not going to mention anymore. So, if you don’t have the funds in your budget for the more expensive drone, we highly recommend getting the Mavic Mini if you’re looking for a great mini drone from an outstanding manufacturer.

If that’s all you needed to know and now just want to check the pricing and availability of the Mavic Mini at Amazon, you can click the link just below. If you need a little more convincing and a lot more information before making your purchase, keep scrolling and reading the rest of this review. By the time you’re done, you’ll be more educated and very likely chomping at the bit to get your own Mavic Mini drone.

The DJI Mavic Mini Is Small and Gets Smaller

The Mavic Mini weighs 249 grams, fully equipped. Since that’s less than 250 grams, you won’t need to register it with the FAA before taking your maiden flight.

This combination of size and weight, under optimal weather conditions (or indoors), should allow you to fly for about 30 minutes on a full battery charge. Of course, as is true of all drone flights, you’ll seldom experience those perfect conditions outside, so expect something less than a 30-minute flight most of the time. Still, being rated at 30 minutes makes the Mavic Mini better than most in its class for time in the air.

DJI provides lots of data points about the Mavic Mini – most of which you probably don’t care about. We’ll give you the more significant items here so you can intelligently compare it to other roughly equivalent models before making your final decision.

Speed – Forward, Up, and Down

While the Mavic drone isn’t really promoted as a racing drone, you probably are still wondering how fast it moves. As mentioned above, you have to remember that these figures were calculated in the best of conditions. For speeds, that would mean no wind involved.

Sometimes, going up and coming down quickly is important. Here are the speeds for maximum ascent in each mode.

And here are the stats for descent speeds.

There are actually two different sub-models, we’ll call them, of the Mavic Mini – model MT1SS5 and model MT1SD25. The main difference between the two is transmission power rating.

The MT1SS5 only flies at the 5.8 GHz range, whereas the MT1SD25 gives you the option of 2.4 GHz or 5.8 GHz. This could be significant if you live (or, at least, fly) in a congested area. So, if you think that might matter, be sure to get the correct sub-model.

The same specs apply to the remote control as well.

There are several specifications that largely only matter if you’re taking pictures or recording video with the built-in camera. Items such as tilt angle, angular velocity, hovering accuracy, gimbal capabilities, video quality, and the like matter a lot if you want the best output.

Since you’ll probably slow down to CineSmooth mode to take your shots, we’ll only give corresponding figures for that mode when discussing tilt angle and angular velocity. After all, that’s why CineSmooth exists.

The maximum tilt angle is 20 degrees. (Actually it’s the same for Position mode.) The maximum angular velocity is 30 degrees per second, which is significantly less than in the other modes, as you would expect.

The gimbal holding the camera lets you tilt it from -110 degrees to +35 degrees. You can roll from -35 degrees through +35 degrees, and you can pan from -20 degrees to +20 degrees. So there’s quite a bit of freedom there to get just the shot you’re looking for.

As you would expect, the remote control itself is a high-quality device, just like the drone. You should theoretically be able to control the Mavic Mini up to 4000 meters from where you stand, when flying the MR1SS5 model. The MR1SD25 is rated at 2000 meters (using the 2.4 GHz option). However, you may be restricted by local conditions to keeping the drone closer to home. In some areas, you have to maintain a line of sight. When flying 4000 meters, which is almost 2.5 miles, you could easily lose sight of your quadcopter.

You can attach a mobile device (phone) that is up to 6 inches (160mm) long and connect it using Lightning, Micro USB, or USB Type-C ports. You can use DJI’s standard “DJI Fly” app for 720p live view operation. Latency (time lag), depending on weather conditions and which device you’re using should range between 170 and 240 milliseconds.

DJI gives you the option of using a heavier, more powerful “Intelligent Flight Battery” or a lighter, less powerful unit. The bigger, 100-gram, Li-ion 2S battery has a capacity of 2400 mAh, while the smaller, 50-gram, LiPo 2S pack has 1100 mAh. So, if you want to fly longer, use the larger battery but realize that it will increase the weight of the drone – which may not be a bad thing in some conditions.

Conclusions About the Mavic Mini

As you can see, we really don’t find much to criticize negatively about the Mavic Mini. We think you’ll enjoy flying your own whether indoors or out