These days lots of drones come equipped with a camera – but how do you find the best mini drone with camera.  Even the smaller, mini drones have a camera. So, if you’re not really in the market for a full-sized drone, here is your Answer: You look to DJI for all your mini drones with a camera.

“Do I have to restrict my choices to DJI drones?” you ask. Well, no, but if you really want the best mini drone, you probably should. That’s why we’re limiting our top three options to the DJI Mavic Mini, the DJI Mini 2, and the collaborative effort between DJI and Ryze Tech – the Tello.

Each of these models has its own reasons for making our top three, and we’ll get into those in a minute. But if you’re in a hurry right now and just want to check the prices of these mini quadcopters with a camera at Amazon, you can click the links in the list just below. Otherwise, you can keep scrolling and reading to get all those details 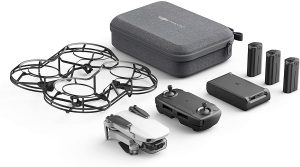 We’re going to start in the middle with the DJI Mavic Mini. The Mavic Mini is middle-of-the-road (or should that be the air?) when it comes to construction, features, and price.

It has the same design and many of the same features as the Mini 2 – which should be considered an upgrade to the Mavic – but it costs less. Obviously, this makes the Mavic more attractive if you don’t have the budget for the fancier Mini 2.

Both of these units are foldable and measure 140 by 81 by 57 millimeters when folded and 159 by 202 by 55 millimeters when opened (without props). They both weigh a tad less than 250 grams, so you won’t need to register them with the FCC before taking off.

Theoretically, you can get about 30 minutes of flight time with either machine, but as we know, that’s with nearly perfect weather conditions which are extremely rare. Expect less time in the air on a single battery charge.

Moving on to the camera components, the gimbal that holds each is essentially the same. It gives the camera a wide range of motion for getting all the stills and video you could want.

From the outside, the camera itself may look similar in each model, but there are some significant upgrades in the Mini 2 which we’ll cover later. Both cameras give you 12 megapixels and use a 1/2.3” sensor.

The remote control is also similar, but the RC for the Mini 2 has an extended range. However, this may not matter much to you because it’s farther than what is normally allowable in most locations anyway.

Both machines use the same DJI Fly app (iOS or Android) and support the same SD cards.

The bottom line here is that, unless you need some of the features of the Mini 2 (patience, we’ll be getting to them shortly) that aren’t available in the Mavic Mini, you should save some money and get the Mavic Mini, since it’s a solid choice for a mini drone with a camera. 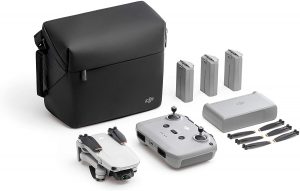 We know you’ve been wondering what makes the Mini 2 so special, and we’re finally going to point out those features that put it at the top of the list of mini drones with cameras for those who can afford it.

First, let’s talk speed. The Mini 2 is faster in all three flight modes – Sport, Normal/Position, and Cine(Smooth) – than the Mavic Mini. Not that these are racing drones, but the Mini 2 will get you to where you want to be sooner than the Mavic drone.

The Mini 2 camera lets you shoot RAW stills and 4K video, so if high quality output is important to you, the Mini 2 is your mini drone of choice.

Largely due to its OcuSync 2.0 software, the Mini 2 remote can transmit up to 6 kilometers, giving you more freedom (where it’s allowed) than the Mavic Mini.

For those of you who have the funds, now that you know what makes the DJI Mini 2 worth more compared to the Mavic Mini, you can make your purchase with the confidence that you’re getting your money’s worth. 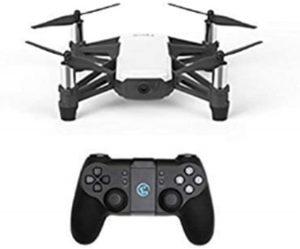 Depending on where you look, you’ll either see the Tello called a DJI mini drone or a Ryze (Tech) mini drone. It seems that DJI is considered the manufacturer, and Ryze is the brand name, though the distinction is blurry. In any case, we think this collaborative effort between the two companies has produced the best mini drone with a camera for those on a tight budget.

The Tello is a little smaller than the other DJI offerings, measuring 98 by 92.5 by 41 millimeters and weighing just 80 grams.

It may feel a bit cheaper to the touch, but for the (significantly lower) price, it’s still a viable option. Just don’t expect it to do all that a Mavic Mini or Mini 2 can.

Camera still shots are in the 5 megapixel range. The best video quality is HD, 720p.

Your in the air time will be just 13 minutes at most, and you can only fly up to 30 meters high before the remote control will start having problems.

The Tello isn’t a “toy” drone, but it comes close. Even moderate winds will affect your flight control significantly, so you may want to consider keeping it indoors on blustery days.

For the price, though, the Tello mini drone is great for those just getting their feet wet, so to speak, when it comes to learning how to use a mini drone with a camera.

Conclusion About The Best Mini Drone with Camera

DJI drones have dominated the industry in terms of quality the last several years. This is the case with mini drones as you see here. Its clear that you cannot go wrong when you purchase a DJI drone.